The show must go on: A.I. to replace players for tonight’s postponed NFL game on Super Squares platform
 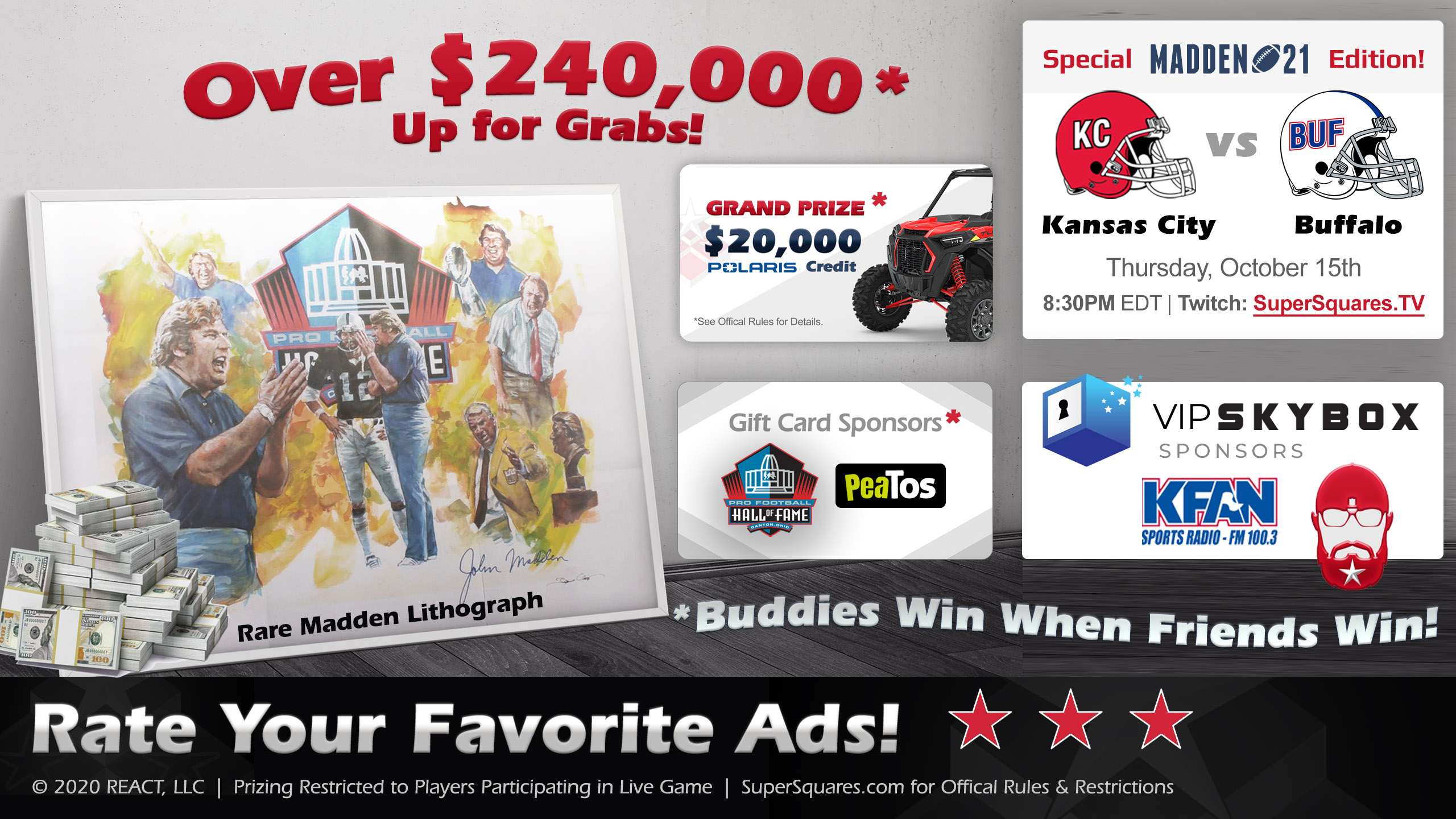 More than $40,000 in prizes has already been awarded to players across the U.S. since the NFL season began.

TAMPA, Fla. – As millions of Americans were disappointed to learn that Thursday Night Football had been postponed by the NFL, a new live mobile game show is working to make the scheduled game between the Buffalo Bills and the Kansas City Chiefs still happen tonight, albeit, with artificial intelligence playing the game in lieu of real players.

Super Squares, the free family-friendly game show app where anyone 18 years of age or older can compete against friends, family members and celebrities for the chance to win real cash and prizes, rolled out last month in time for the NFL season. But, in order for the mobile game show to be played the way it was designed, there would normally be a live game on TV.

“As a result of tonight’s postponed game, we looked at different options to still host our game as scheduled. We saw an opportunity to see how our app would work if the  football game was played online using computers, instead,” said Frank Maggio, the inventor of Super Squares® and CEO of React. “We thought, ‘What better than Madden 21® to take the place of real players?’, and to commemorate the event, we’re giving away a rare John Madden lithograph from the Pro Football Hall of Fame.”

As a result, the simulated game will air on the Super Squares Twitch channel at 8:30 p.m. EDT. The game will be viewable for free from PC’s and mobile devices, the Twitch app, and at www.Twitch.tv/SuperSquares.

To make things even more interesting, viewers of the simulation, viewable only on Twitch, will be able to play the Super Squares® game show on their mobile devices, to gain access to over $240,000 in prizes.  Gift cards from national sponsors including the Pro Football Hall of Fame and Peatos® snacks are available for prizes, as well as a $20,000 credit towards a Polaris® power sport product on November 2nd. A $100,000 jackpot is available to any player who score a Perfect Game.

“This is a great opportunity for someone looking to learn how to play Super Squares,” said Maggio. “Our host and special guest streamer, Action Jaxon, will walk first time players through it prior to the simulated game beginning and we will be answering questions, live, though it is pretty intuitive for most players.”

Since mid September, more than $40,000 has already been awarded, with a much larger prize announcement scheduled for later this month.

About React, LLC
Founded in 2012, React, LLC is an experiential advertising technology and entertainment company that thinks of “advertising as a sport™.” By adrenalizing advertising™, React excites audiences with rewarding, branded two-screen experiences during the most viewed and attended sporting and media events in the world. The company’s commitment to “respect, protect, and reward attention” honors user privacy by never selling or sharing personally identifiable information. Details about React can be found at https://react.net, and Super Squares details are available at http://SuperSquares.com.

Excited to Host the Denver /NYJ Game on Thursday!

Things are moving along fast here at Super Squares.  We have a new app update that let's you keep track of your Tie-Breakers all game long - try it on Thursday!  Here are details of the first of this week's games: We also launched our new merch shop - check it out!...

Week III of Super Squares proved to be a fun and exciting event for all players! The Lions actually won...surprisingly! Meanwhile, the watch party on https://twitch.tv/supersquares hosted by none other than our official host Jonathan Blevins was entertaining back and...