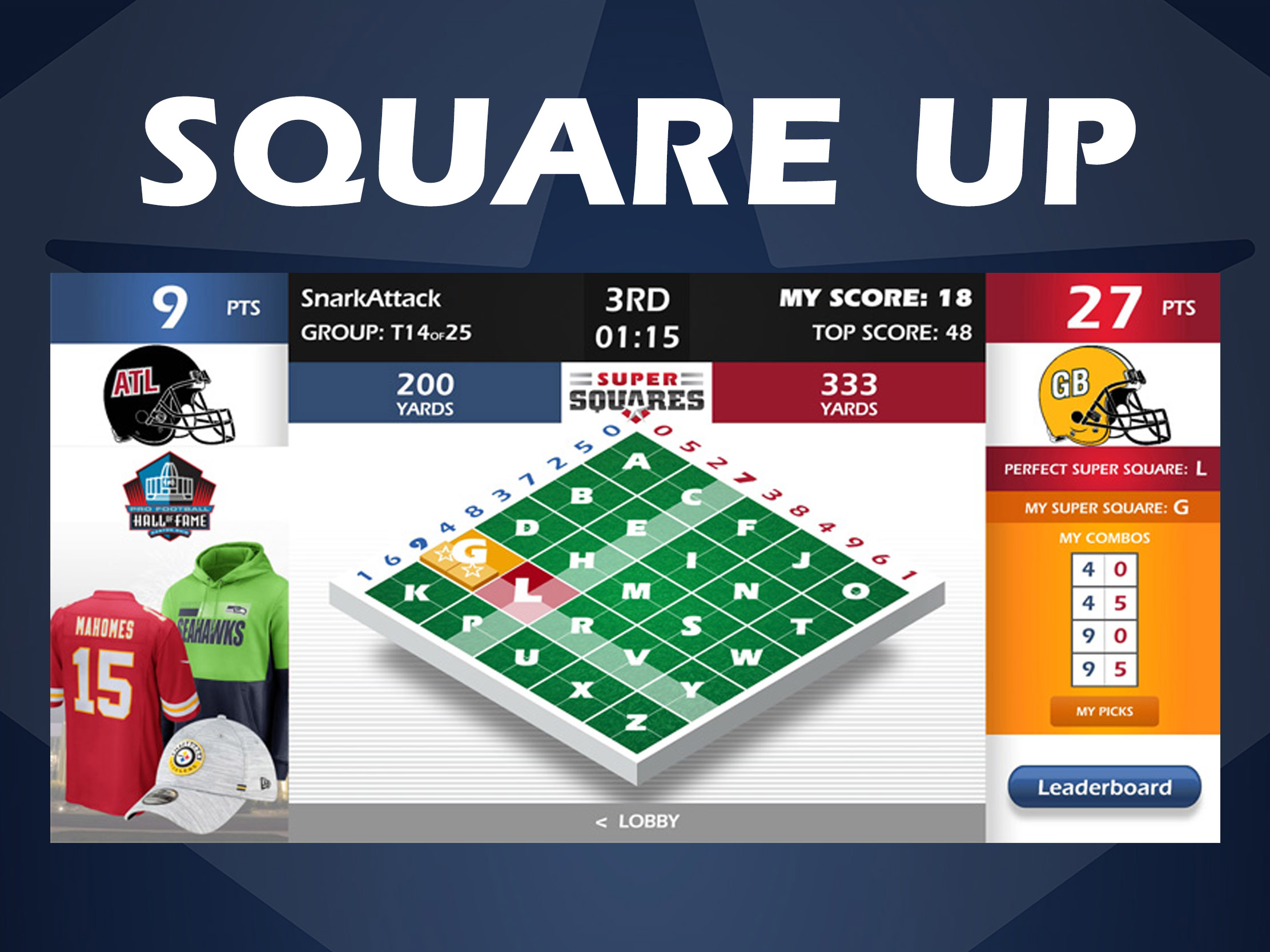 ESNY speaks to Frank Maggio and Matt Birk about their game-changing Super Squares app ahead of the conference championships and Super Bowl.
A game as old as, well, the sport that pairs with it.

It’s usually around this time of year when you’ll start to see an old fashioned “squares” game pop up, given the NFL Playoffs are in full swing and the Super Bowl is right around the corner. It’s the game where you throw in $1, maybe $2, you pick a square out of 100, and when the numbers are drawn, you sit and wait to see if the two numbers you have line up with the final score of the football game that’s being played.

It’s exciting to find out your numbers in the beginning, until you realize you didn’t get a seven or a three and you’re essentially screwed out of luck. It also may be exciting at the end when you figure out if you’ve won a prize or not.

The middle part is where it becomes a drag though. Luckily, that’s where Super Squares comes into play.

Super Squares, which you can download on the Apple App Store as well as on Google Play, brings more to the simple “squares” game than one could imagine. You begin by joining a group of up to 25, and from there, a user actually predicts three outcomes of a game, reacts to two trivia-type questions in regard to sponsors, and then receives four score combos on a regular board of squares.

The scores for each player — one point for rating a sponsor ad, three points for correct quiz answers, six points for a partial super square, and 11 points for a perfect super square — are thus tallied at the end, and the highest-scoring group winners across the app will be eligible for prizes.

What’s interesting about Super Squares, however, is that it’s not just a game to be played on the day of the Super Bowl — the biggest day of the year for “squares.” Super Squares is more than that and offers prizes for every game, including the pair of conference championships this weekend.

The game is growing and will continue to grow, there’s no doubt about it. But it’s interesting to note that the idea actually started with a 23-year-old and his fondness for scratch-off tickets.

“So I like games, right? I’ve liked games since I was a kid. I’ve loved game shows since I was a kid,” Super Squares founder and CEO Frank Maggio told ESNY this week. “And one day I was in a grocery store working — I worked for the world’s largest advertiser, Procter & Gamble — and I came across a scratch-off game having to do with football and it was Monday Night Football…I picked up a handful of these scratch cards and I figured out how to make every one a winner and turned every game card into $5,500 and I collected 4,000 of them and turned in $21 million worth of winning scratch-off tickets.”

This entire concept and the effort to make it work doesn’t all fall on Maggio though. Every great idea needs a team to bring it all together, and on his team, Maggio has none other than former Vikings/Ravens center and six-time Pro Bowler Matt Birk (Commissioner of Sports at React LLC, the parent company). And the Super Bowl champion and Harvard alum had to admit: “squares” isn’t exactly the most entertaining concept.

Super Squares, however, is attempting to change that, and doing so with a $2.4 million prize pool that’s currently live through the Super Bowl on Sunday, Feb. 7.

“‘Squares’ has probably been around since the first Super Bowl party. It’s this historic traditional game. It’s normally only played once a year on the Super Bowl,” Birk said. “The great thing is everybody knows how to play ‘squares.’ It’s not complicated. The bad news is, it’s actually a pretty boring game — you throw money in the pot, you get one set of numbers, and it’s totally random. It’s all luck and most numbers in a football game aren’t very good. So as soon as you get your number, it’s kind of over.”

“Our game, Super Squares, with a ‘Super Square’ you actually get four number combinations,” he added. “There’s an algorithm and you’re always guaranteed at least one good number — a zero, a three, a four, or a seven — and then every quarter, you get a new Super Square. So instead of having one set of numbers for the whole game, in Super Squares, you’re getting 16 sets of numbers and it changes every quarter. So you’re actually playing during the game…you have a reason to look at your numbers and your focus is always changing, you’re always alive.

“We have the predictor element as well. We are predictor squares. About half of our points are based on the three predictions you make about the game before it happens. So we’re a perfect blend of skill and luck”

Just because football season is nearing its conclusion doesn’t mean Super Squares is vanishing until August/September either. The guys reveal that a version of the game is already constructed for hockey and a NASCAR version is additionally in progress. The game could also be utilized for sports like basketball, baseball, as well as soccer.

Super Squares is currently thriving in an industry that’s increasing in popularity. The concept of online gaming, especially when money/prizes and sports are involved, is surging amid the COVID-19 pandemic. Needless to say, a safe and convenient way to play is what customers (both new and existing) desire, and Super Squares provides that.

Like with any growing industry, there’s competition though, and for Super Squares, it comes at the hands of Rocket Mortgage, who are rolling out their “squares” game for Super Bowl 55.

But regardless of Rocket Mortgage’s size and popularity, the initial idea for the game comes from Maggio, who claims he originally introduced the idea to what’s now their competitor.

“I presented Super Squares to Rocket Mortgage in 2018. They entered this space in 2020, and there’s no love lost between us and Rocket Mortgage, and the NFL is in the middle of it because we presented this to the NFL as well,” Maggio said. “So, there is a little bit of heat right now between us, who have been doing this since September. But we were going to start last year, and Rocket basically all of a sudden pops up with this ‘squares’ game.”

“You pay attention to play our game. Your attention to brands is the currency of our game,” he stated. “With their game, you’re data. They want your data. They want you to basically go through a pre-app on a mortgage so you can get a square. We are the complete opposite of that. We’re actually an ad tech company that wants to give advertisers full attention but protect people’s privacy. That’s our future, we are developing all kinds of games where advertising is the currency but paying attention in a privacy-protected way is a brand new advertising economy. So, there’s a lot here beyond just a great game about football and prediction.”

“I personally presented Super Squares with presentations to [Rocket Mortgage’s] CMO twice,” Maggio added. “In December of 2019, they asked us what would it cost for them to be the only sponsor of Super Squares without ever telling us that they were going to do this on their own. And then, we gave them an answer and they said nothing for a month, and then said, ‘It’s too late for us to do anything, we’re working on something else.’ And then one day, actually the same day that I had a meeting with the NFL in New York, the NFL called me and told me that a sponsor was going to become an official sponsor of the NFL and they were going to announce their sponsorship through a standard Super Bowl ‘squares’ game.”

With that said, Super Squares has a $2 million jackpot for the Super Bowl and will also be giving away a Rivian electric adventure vehicle — which you can’t win anywhere else, according to Birk — as well as Indiana eFTR motorbikes and gift certificates to the Pro Football Hall of Fame.

Thus, the prizes vary, and one of the more intriguing ways to win is actually through Super Squares’ buddy system.

Basically, if you register with Super Squares and refer a friend to register as well, whenever you win, they win. That’s right. The same exact prize. With Rocket Mortgage, you actually get an extra square whenever a friend registers, providing you with an advantage over them.

Not to mention, Super Squares is offering a great experience for the Super Bowl — a watch party in Tampa Bay (their location) hosted on Twitch by none other than Mike Golic, former NFL player and current ESPN college football analyst.

Super Squares will also be settling a critical debate — the best Super Bowl ads. They’ll be revealing which ads were the best in real-time after thousands of app users take part in a rating system.

Maggio states that the user is “part of the game.” Thus, in an era where individuals desire convenience and interactiveness in regard to entertainment, Super Squares is a few steps ahead.

You can get in on the action by downloading the mobile app ahead of the NFC and AFC Championship Games, which take place this Sunday, Jan. 24.