Tell us a bit about yourself, so that we know you are a real person. You’ll only have to register once and we won’t share your details with anyone.  You’ll also be asked, “Who’s Your Buddy?”  If an EXISTING USER asked you to join, be sure to add their Screen Name or email address associated with their Screen Name (they’ll let you know!).  During specially promoted Game Shows and Tournaments, your Buddy will win prizes when YOU win.

Create a screen name and tell us where to send prizes when you win. Your screen name will show up on Leaderboards and possibly on national radio and TV broadcasts.
SO -please keep your Screen Name clean – don’t use your real name, and no profanity, not even cleverly hidden.  We WILL change your Screen Name by placing an asterisk (*) over letter that we deem create an inappropriate word or phrase.

Note:  React, LLC does not sell your information.  Check out our privacy policy to learn how we use and protect your data.

From a list of available pro games, you’ll select a “Current” game.  Remember – you may only join ONE game per Game Show hour.  If more than one football game starts during the 1:00 PM ET hour, be certain to select the one you intent to play.

You’re automatically placed in a Game Group of up to 24 others who are “Checking In” around the same time. These are players who you’ll be competing against all Game Show. If you finish first in your Game Group, you may be eligible for a valuable prize.

It’s that easy to join!

Remember – ALWAYS PAY ATTENTION to the game and to the Sponsors’ advertisements, logos, and even prize details.

React to the in-app Mobile TV commercials by rating them 1, 2, or 3 stars within the 7 seconds allocated, to earn 1 Game Show point.  Be honest – let out Sponsors know your favorite ads by giving them 3 stars.  You’ll also react to Quiz Questions about each Game Break’s Sponsors. 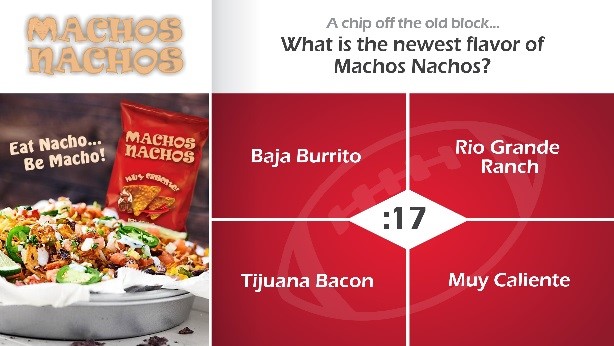 Then… Watch the game – and leave on notifications.

In between Game Breaks, all you really need to do is pay attention to the game.  Sure, you can open Super Squares™ to check your Game Group Leaderboard, the score and even the game clock.  If you’ve created or joined a SkyBox, you’ll see tabs to enter and mingle with players who also joined.  And who can resist watching the “Perfect Super Square” move in the app, whenever there’s a score or major stat change?  But all you REALLY need to do is to ENJOY THE GAME.  Plus, it conserves batteries, so feel free to put Super Squares™ in the background.  As long as notifications are “on,” we’ll notify you when to Check In to re-enter the Game Show.

Here’s a look at what you’ll see in between Game Breaks: 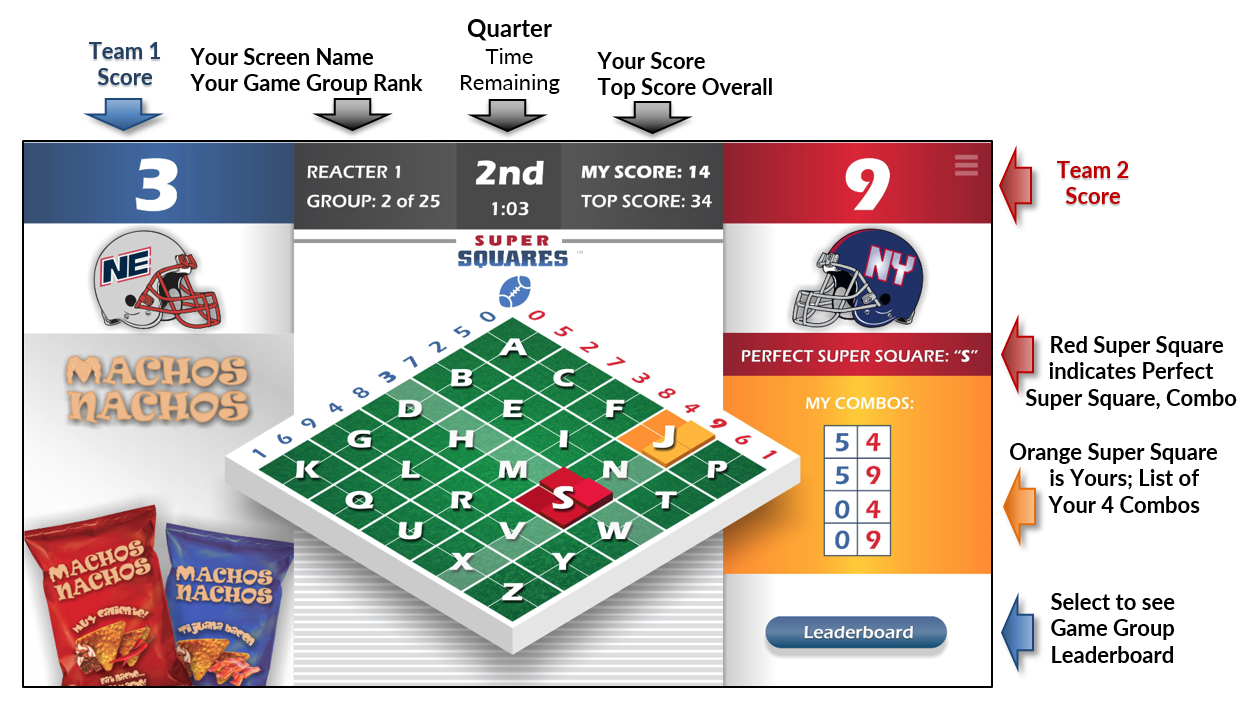 At the end of each quarter, there’s a new Game Break. Enter the Game Show within 3* minutes to:

Check-in to reveal your Quiz results, compare your Super Square to the actual score, and post your points to the Leaderboard. 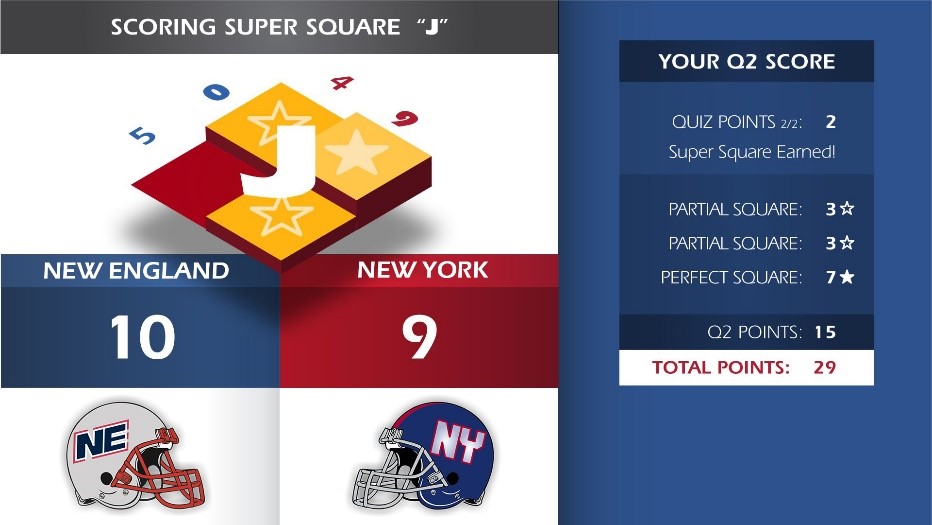 React to commercials by awarding 1-3 stars, and to Quiz Questions about this Game Break’s Sponsors, and sporting event action from the just-concluded section of game play. 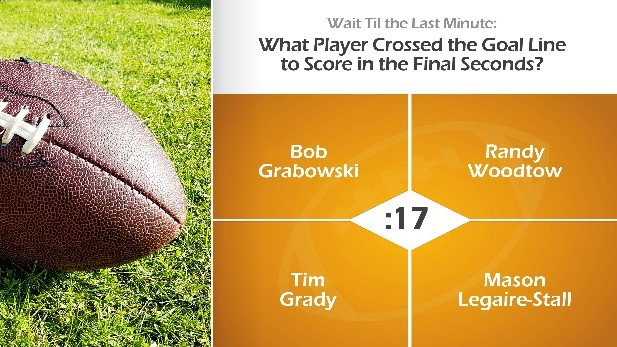 Square Up to receive your next randomly generated Super Square and four score combos.

That’s it – the Super Squares™ app does the rest. It keeps track of your score, notifies you when to check in, and PROVIDED YOU CHECK IN ON TIME, reveals Square Combo points from the last quarter, at the start of every Game Break, adding them to your Game Show point total. After the Game Show ends, you’re notified when the unofficial results are in.  Within 24 hours, Winners can see Game Show prize awards under the Winner’s List section of the app’s menu.  Winners are then notified by email to complete the validation process and claim their prize.

Ready to watch, react and win? Download the Android or Apple iOS version of the app now!

See Official Rules for details pertaining to each Super Squares Game Show and Tournament.  Prizes and rules will vary by event.

So, you want to become a Super Squares™ savant, eh? We can’t blame you – there’s never been a game show as rewarding to play and win, and the key to winning is paying attention. That includes paying attention to this “DEEPER DIVE” section. Good choice!

There are three ways to earn and post points with Super Squares™:  (A) Score Combo points from matching Partial (3 points) or Perfect (7 points) Square combos, (2) REACT to requests to rate commercials (1 point per rating, regardless if 1, 2, or 3 stars), and to Quiz Question points (2 points for each correct answer), and (3) up to 3 Tie-Breaker Points (maximum 1 per Tie-Breaker response). The total number of Game Show points may vary from sport to sport and even game to game, as we may add bonus “Quick Quizzes” from time to time. (Quick Quizzes earn 2 points for each correct response, or any response to a survey or offer question.)

Here’s what you need to know about each, to really master Super Squares™:

Since Super Squares™ are assigned at random, Lady Luck certainly plays a part in Super Squares™. But without Checking In during the next Game Break, you may actually earn NO Game Show Points from your Super Square! You’ll also find that most winners climb the leaderboard because they “React” correctly every Game Break.  After all, it’s all about REACTING to prove you’ve paid attention.

Each Game Break, you will be asked to rate each Mobile TV commercial to earn 1 Game Show Point, and then you’ll be served 2 Quiz Questions about the Sponsor’s ads inside of the Super Squares™ App. You will claim 2 Game Show Point for every correct answer you select in less than 20 seconds. Game Breaks at the end of a quarter (or end of game) also contain 2 Quiz Questions about the preceding quarter’s most important plays, scoring, and game stats. 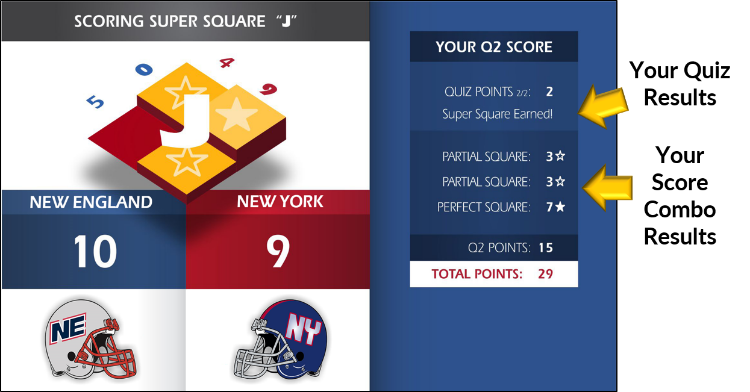 TO  CLAIM A PERFECT SUPER SQUARE requires that you a) Possess the Super Square that contains the Perfect Score Combo at the end of the quarter – AND – b) Check In NEXT Game Break to post the points to your Game Group Leaderboard.

If you’ve played football squares on paper, you already understand how to match a Score Combo to the football game score. But just in case, let’s recap:  A Score Combo consists of two digits (like 0,9), which you will compare to the last digit of the score of each team. The “left digit” corresponds to the team on the left, and the “right digit” to the team on the right.

So, in this example, where the score is Left Team 3, Right Team 9, the perfect Score Combo is 3,9 (which is one of the four Score Combos within Super Square “S”): 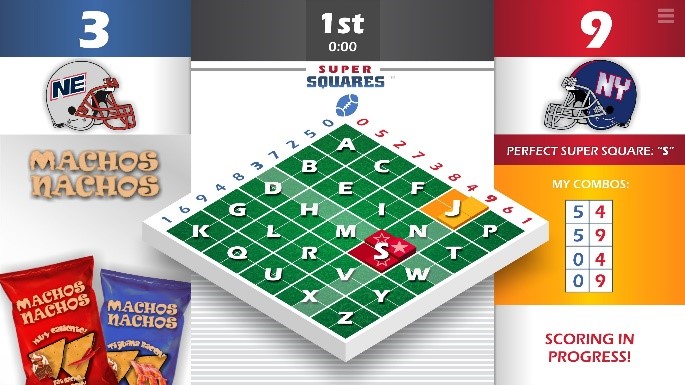 To illustrate further, let’s assume the score at the end of the quarter is 10 – 9. Now, your Super Square J contains the Perfect Score Combo – as well as two Partial Square Combos:

How do you EARN all possible Game Show Points from a Partial or Perfect Score Combo? Easy – Be sure to Check In on time during the next Game Break.

Checking In before kickoff doesn’t just insure you’re “in the game” before the first Game Break window closes, it also means you’ll be able to claim points from predicting the outcome of the game. The predictions you make before kickoff can earn up to 3 important Game Show points – which you will see when you post your Final Game Show Score at the end of the game.

3 points doesn’t sound like a lot, but with thousands or even millions of players in the game, just a fraction of a point can and usually does make the difference in Super Squares™.

The three Prediction Questions you will be asked before every football game are generally the same, so do your homework, and be prepared to predict the final score, the team and yards with the longest play from scrimmage, and the total offensive yards for both teams.  Classics games may present different prediction questions that may include events in the repeat broadcast, and even predictions as to the players of the Game Show.

Tie-Breaker Points are based upon your “Percentile Rank” when compared to the eventual outcome of the Football Game. Percentile Ranks for each Tie-Breaker Question is based on a proprietary algorithm that increases your score the closer you are to the final result.

Tie-Breaker points end in 4 digits after the decimal point. They make only a fraction of a difference – literally – but that fraction is often where Overall Leaderboard prizes and even Grand Prize winners are determined.

Lastly, here are some details on how the Percentile Ranks work:

When ranking predictions tied to the final score of a Football Game, the number of points away from the actual score for each team are added together. For example, if the prediction is Home 21, Away 18, and the actual result is Home 27, Away 14, the prediction would have missed the correct outcome by 6 + 4 = 10 points.

When ranking predictions that require a selection of one of two teams, as well as a number of points or yards, all predictions that select the wrong team will score zero (0) Tie Breaker points. Only predictions that select the correct team(s) are eligible to be ranked and to receive points. For example, if the prediction is that the Home team will have the longest play from scrimmage, predicting 34 yards, and instead, the Away team posts the longest play from scrimmage, for 30 yards, the Participant will receive no Tie-Breaker Points, despite having missed by only 4 yards. (Note: If both teams have the identical distance, both team selections will be correct).

The most Tie-Breaker Points that can be earned in a single game is 3.0000.

Close Out Your Game Show to Reveal and Post a Score

You’ve reached the one yard line – Checking In early, and on time for every Game Break. But to post your maximum Game Show score, you need to finish the game, and post your Final Game Show Score.